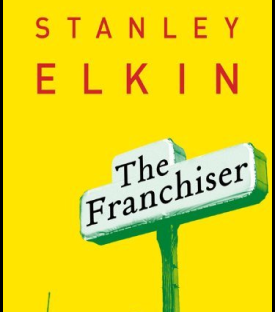 A few lines are spoken deep in the Franchiser where the course of events suddenly shift, the novel’s focus jolts away towards being more than just a self-conscious, slightly corny satire of the golden-arch homogenization of small-town-big-city America. Ben Flesh, Elkin’s hero and franchisee, is suddenly faced with an impending multiply-sclerotic powerlessness that bounds back and forth, grows and subsides through the rest of the novel — the scope of the novel no longer space wasted on been-there-done-that social commentary but deliriously depressing and impacting tragicomedy, well worth its place on McCaffery’s 20th-century best-of.

Ben Flesh’s anxious breakdown shifts between surreal comedy and genuine heartbreak. The twins, the triplets, all their bizarre health disorders, humorous but fucking damning and you know it. Between all the silly ha-has we get from the uncontrollably prejudiced (“It’s like a disease.”), the chronically constipated, &c., we’re still left waiting for the page they begin dropping like flies. And Flesh’s life takes a turn following a retrobulbar optic neuritis and an accompanying suggestion — an experience shared in dangerous detail to the reader as it was felt by Elkin himself outside of his writing — his Everyman Walt Disney is, in the flesh, powerless, and it’s pretty heartbreaking at times, especially having witnessed this struggle with a similarly-crippling disease affecting a loved one, the powerlessness derived just as crushing both personally and socially.

Standing out: It’s impossible to forget the surreality of the imposter Colonel Sanders (“finger-lickin’ good!”—DUH! wudyooespect?), the dropping of those beloved flies interspersed too casually with Ben Flesh’s failing Travel Inn—his final franchise!—, the discovery of sexual deviancy sweeping the nation—honestly, the whole ending, the last 50 pages in their entirety: Brilliant. Delivery made comedy upsetting; it’s, like, uhm, too deadpan and matter-of-fact when things get absurd and poetically rich and then, ahh! there’s more failure in the Flesh and—seriously?—excruciating descriptions of hotel room furnishings. Dang. It hurts, it had too much an impact, a physical punch to them there guts, and it came with such a buildup! from slow and steady (and maybe—an aside—a little bit tiring-slash-boring) to rock-‘em-friggin’-sock’em.

From what I’ve read, powerlessness and its impacts are Elkin’s forte; coming close to death but never quite reaching it, it’s always impending, threatening and real for his heroes and heroines. Keeps me interested, and I’ll be checking out more from Elkin in the future, starting with the sickly Magic Kingdom. Ahh, ahh!