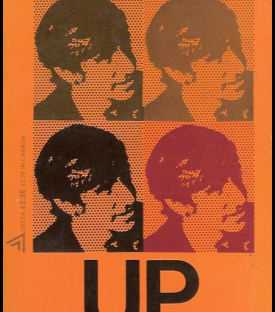 Ronald Sukenick was one of the founders and vocal leaders of the Fiction Collective back in ’68, a club of (largely) New York innovators taking advantage of the postmodern, self-reflective revolution they were simultaneously witnessing and instigating in literature. They — including authors like Steve Katz and Jonathan Baumbach — argued for an embracing of verbal tricks, of cut-and-paste visual collages in place of story progression, accompanied by a self-awareness of their own limits and possible stylistic pretensions in order to combat the novel’s stagnation. Does it add to literature? Does such a question matter, when the novel itself is the author unloading his soul and dumping all his relationship issues out on the reader in as humorous and creative a way he can cough up, no boundaries considered?

A revolutionary of the literary form, he sits today known only among the postmodern literati and English professors. Most of his work is currently out of print.

UP is a legendary novel both good and bad; in some ways it’s nothing more than a slow-jerk of self-satisfied, self-obsessed snark, as well as a misogynistic representation of the male-dominated New York publishing industry: Like so many of his FC/early post-modernist peers, women are nothing more than sexual jokes and attractions for the male reader, only reaching that faint trace of genuine humanity when tugging at the author’s past regrets and failures. (While I wouldn’t have minded this a few years ago, it only upsets me now and hurts my impression of the book.)

UP lacks a trace of linearity, or even a border between fantasy and reality; flowing back and forth, sometimes mid-paragraph, between times, fantasies, sexual misadventures both real and imagined, perspectives, focuses, etc. Sukenick, the writer, is the only constant. Sometimes a failing professor of English pushing himself towards employment; other times a slumming New Yorker writing his own novel as the pages go by, rats infesting the framework; then and before a teenage dreamer reaching for a degree in God-knows-what; simultaneously his alter-ego: A hyper-misogynist Mary Sue interacting with the real Sukenick; oftentimes a sack of lost chances dealing in broken dreams with a partially fictionalized love interest. The real author discusses his upcoming novel with associates, asking them what they think of the parts yet to happen: He’s given anything but praise.

Sukenick ends his book with a literal literary classroom revolution, a segue to a party celebrating his book, a book he seems to know is a weak imitation with nothing to say however hard he tries to innovate and say something. All the novel’s characters, lost romances, and even his defeated alter-ego, Strop Banally, appear to disregard his work.

The trip’s a lot of fun while it lasts, but its of-its-time ‘60s romantic qualities make the forever-underground status understandable. Unless you’re this book’s core audience, unless you’re a frustrated English academic or a fan of the self-aware post-modernist movement this book helped launch, there’s no reason to ever get UP: Either stay away or continue the dig.

”Our generation is a sacrifice to history. When a creative writing student asks me what to write about I answer: Amuse yourself. There’s nothing to write about….I see what you’re going for. Writing as self-expression and all that. The Romantic gambit. But you can’t go back. Between crisis and catastrophe who cares about your ego? Your complaint, your indignation, your outrage—your boils, your hangnails, your stomach aches. It turns to self-pity. This just bores us, we have the same problems. You ought to stick to comedy….Now don’t go and blame yourself. This is just the trouble. You’re helpless. It’s history. It’s politics. It’s capitalism. It’s the literary situation. We’re all paralyzed.”