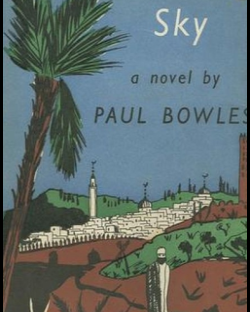 Three American travelers, wealthy beyond description, drift into the Saharan desert, suffering constant discomfort, loneliness, illness. Their station as travelers is key: They are not the foul-brained tourist gawkers they miserably judge, gathering immediate snapshots to largely leave behind, but Travelers with a T, ingrained in the cultures they move between, accepting the differences or rejecting them — they at least pretend to understand the foreign cultures they inhabit.

Travelers Kit, Port and Tunner live this philosophical post-war outlook from bedrooms and buses, boxcars and hashish-hazed cafes, the culture on the outskirts only there to suffer the Americans’ wealthy dissatisfaction. Rejecting, then rejecting, they move further inland, further into a bored American’s Heart of Darkness, attitude and identity similarly removing themselves from the malaise’d bodies with every mile, every dune crossed into the oppression of that finalizing sheltering sky.

These American Travelers are so flatly self-centered and unlikeable. Never are we meant to like them, or the many characters — namely the Lyles, so far absorbed by the Sahara they no longer witness their identities past and current as viable — interacting with them, there to receive readers’ smiles, but the juxtaposition of bloated and bloating selfishness and ignorance by these enlightened Travelers is too overwhelming that it inches miles past the point of believability; the result is dissonantly ahead of its time — the marriage of wealth and aimlessless so common and approachable since the ‘80s — and a simple revival of Bowles’ 1920s inspirations. Yet, despite this, their interactions, their stories: They’re absorbing beneath Bowles’ slick, addictive prose; his crafting of the Saharan setting one of the novel’s greatest strengths beginning to end.

To a degree, at least.

I’m with many readers who feel the book’s final act is bizarrely out of place. Some good ideas present in Kit’s breakdown and loss of identity to the foreign desert, but the execution far from ideal in the shadow of the alienating but constant travel, as well as Port’s painful, powerful absorption into the sheltering sky.

”There are so many things I want to say. I don’t know what they are. I’ve forgotten them all.” She patted his hand lightly. “It’s always that way.”

It‘s jarring because it no longer feels like it’s Kit casting judgment on the Saharan culture, but Bowles himself, his portrayal of Kit’s captivity and submission to the Soudanese Islamic culture is downright uncomfortable to read and end an otherwise great and enjoyable story with.

Like with the characters, I feel a dissonance over the place of this book in literary canon. I enjoyed it and don’t regret reading it one whit, but by this point it’s been done again and again, often better, by other writers before and after Bowles, and thematically it’s a book that’ll continue being covered as long as the culture that bore it evolves in this confusing direction. It doubtless won’t be forgotten entirely, but its place and importance is continually being supplanted by other, always contemporary novels. Thank you, Larry McCaffery, but I don’t think I’d call this required reading.