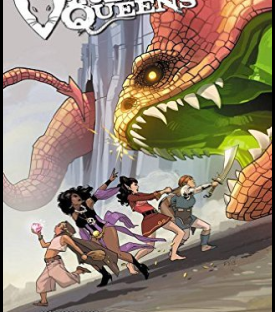 Rat Queens is pretty danged adorable. Four life-long, perpetually-young friends in a self-aware sword and sorcery ‘verse (with a pinch of Lovecraft) get by on mercenary pay and drunken brawls.

The first five issues collected here provide a good setup with a fair share of weaknesses. It reminded me a lot of a foul-mouthed version of Buffy the Vampire Slayer‘s first season — all four characters are walking one-liners that embody different Strong Female Character™ roles. This leaves their dialogue and sense of humor feeling forced and fake — especially in the first issue, in which the dialogue is exclusively one-liners — but impossibly likable. Under Wiebe’s authorial weaknesses, Hannah et al. are a crew I know I could come to love for their stupid jokes and stubborn loyalty (and despite the slightly-shitty, ignorant pseudo-feminism behind them).

The “Sass & Sorcery” arc is mostly a set-up for the characters and the subsequent arc, “The Far Reaching Tentacles of N’Rygoth.” Our heroes are targeted by assassins, leading to bloodthirsty encounters with trolls, goblin armies, rival mercenaries, and Vol. 2’s tragic, tentacle’d conspiracy. It’s a lot of fun, and most of the weaknesses are shed immediately in Vol. 2. Definitely worth checking out if you’re hankering for dumb fun.