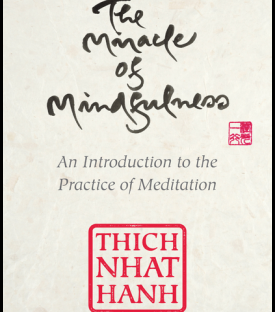 With how widespread Thích Nhất Hạnh’s name is in the new age world, I completely misunderstood who he was and what he taught. Hanh’s Miracle of Mindfulness is a series of translated letters from 1968 — written while exiled from Vietnam — instructing young monks overseas on meditation. His ‘mindfulness’ isn’t the confusing buzzword it is today, but simply a way to inch towards the Buddhist idea of enlightenment.

I expected scam artistry akin to Eckhart Tolle or Deepak Chopra, not legitimate Buddhist teachings. There’s still a few lines of woo-woo that don’t mean anything (to me, at least), but the majority of Hanh’s Buddhist ideas reject the nonsense of religious text and simply want the the reader to be self-aware: Recognize their emotions and the emotions of others; the causes of social strife and personal discomfort; the is-ness of all things.

It’s a straight, beautiful series of meditations to wash away one’s anxieties, starting with the most basic step in meditation: Be conscious of one’s breathing. Focus on the act of breathing. Focus on any act one’s doing and enjoy it — walking, doing the dishes, the laundry — because all moments in life could and should be enjoyable.

The book concludes with a useful step-by-step guide on each method of meditation without the letters’ contexts — a great reference for when one needs reminders.

Hanh’s writing is succinct, and makes the reader feel beautiful without asking for anything in return. Highly recommended.