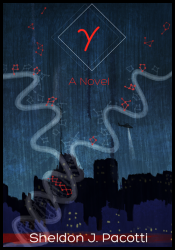 Game Write is a recurring series dedicated to the fiction of game industry veterans. From the best-selling titles of Drew Karpyshyn and Austin Grossman, to the obscure classics of Jane Jensen and Sheldon Pacotti, this series hopes to unearth both the gems and the trash we tend to leave buried in the credits. In this entry, we look at Sheldon Pacotti’s newest novel, Gamma — the first new piece of fiction from Pacotti since he entered the game industry with Ion Storm’s Deus Ex in 2000 — and a fascinating look at a near future ruled by biotechnology and growing social unrest. 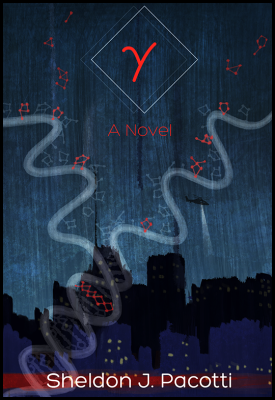 Eighteen years in the making, Gamma (γ) is a tour de force of hard science fiction masquerading as a pot-boiler. It’s Michael Crichton by way of Thomas Pynchon; prose alternating between a clinical academicism, claustrophobic noir, and unstable stream-of-consciousness. The follies of academia, science, uneven development, et al., are center stage in this fast-paced thriller about engineering the human genome and the web of institutionalized classism, sexism, and racism that fueled — and continue to fuel — the biotech revolution. Like Pacotti’s work on the 2000 video game, Deus Ex, we also see our fair share of political and corporate conspiracies, too.

With Gamma, you can feel author Sheldon Pacotti’s struggle to give voice to marginalized cultures and minorities. Distrust of not just government, but intellectuals and scientists, is at an all-time high in 2037,* and, as corporate favoritism and the abuse of human subjects send ripples through our social hierarchy, every affected party has their voice heard and felt. From the research scientists in the middle of the experiments, the engineered – or ‘transgenic’ – subjects themselves, the beat officers dealing with the sometimes violent ramifications of this distrust, to the crowd in the street expressing that distrust and frustration: Each is understood; empathized with. It makes Gamma’s world one of the most believable and real futures I’ve experienced, and I’m absolutely stunned that Gamma was forced into self-publication. It’s one of the best sci-fi novels I’ve read in years.

In 2037, Shannon Jones has been in prison for ten years. His experiments in genomic engineering at Caltech were publicly denounced for their unethical abuse of human subject terms, and the sometimes-fatal consequences his work had on the transgenic subjects. His work, however, led to a biotech revolution that propelled his former employer, White Incubator, Inc., to the forefront of biotechnology – unfortunately, it also left a lot of unhealthy subjects and faulty research in the hands of aging, arrogant scientists who didn’t understand the research as well as they could have. This itself created a near-status quo of stilted discoveries and genetic products with short-term implications, rather than the paradigm shift Shannon Jones was hoping to gift to the world.‡

Shannon Jones was himself a victim of the same research: Dr. White, father of the biotechnology leader White Incubator, Inc., crudely replaced an infinitesimal portion of Jones’ genes with those of selected donors and a few original modifications. Jones was born brilliant beyond his lower-class upbringing, but his mind was also unstable and struggled with empathy. Without a stable, specific diet, his mind is also prone to becoming increasingly unstable. Dr. White’s experiments seemed to be fueled by abuse of lower-class subjects — who otherwise didn’t know better and served as grossly-affordable patients — and a self-loathing racism that wanted to force the ‘savagery’ out of the disadvantaged. Jones was engineered to engineer others, and eventually be the scapegoat for White Incubator’s more questionable, often ignorant research.

The plot moves with Jones’ escape from prison and the unveiling that White Incubator had covered up the existence of a control group in the condemned research: Clones – termed ‘Normals’ by the media – of transgenics with no genetic alterations. Gaining access to the Corpus – a public-domain repository for scientific research – Jones hopes to help all those subjects still suffering from the effects of earlier errors left in his and Dr. White’s research. A woman who bears a startling resemblance to his lost daughter is one of those subjects, and the primary driver for his actions. Over the course of the novel, Jones becomes a symbol of injustice for the voiceless masses; he’s been branded a monster, his voice taken from him, by figures of government and corporate power. He’s a symbol of intellectual freedom, suppressed by the very institutionalized prejudice that created and then controlled him. He’s also knowingly responsible for irredeemable betrayals of his subjects’ safety, fully aware that errors in his experiments could and would end in suffering and sometimes death. It’s not always easy to root for him.

Shannon’s potential daughter, Luz, has spent her entire life struggling to break out of her class. Hearing that she could be a transgenic subject, another product of abuse being dusted under the rug and ignored like the Normals were, is a bombshell. She inches towards cliché by being a prostitute by night, and an intellectual artist by day, but she and the narrative are furiously self-aware of her life as a cliché in a way that’s refreshing. Those around her struggle through mental gymnastics to punish Luz, and then paint her as the root cause of her own suffering, someone deserving of every ill she gets. Still, Luz might be the weakest lead in Gamma for being born from condescending stereotypes, even if much of what defines her character is being aware of those stereotypes.

In the midst of the ongoing political and social chaos initiated by Jones’ escape, Detective Jalil Medan copes with the rising distrust in the streets – distrust which includes authorities like the police force, seen as a dumb, brutal arm of higher powers. Jalil, new on the job, is almost immediately thrust into the spotlight thanks to footage of him beating a subject far more than he should have. His minority status as an Islamic son of immigrants doesn’t help, either.§ The brutality in his actions wasn’t black-or-white, however, as he was blinded by his own injuries sustained from the subject. (Despite this, he constantly questions and regrets his actions as angry and impulsive.) Like Shannon Jones, his being a minority provides an easy scapegoat for his superiors to get away with their own abuses of power.

It’s a complex web of interconnected issues and individuals. It’s never clear – to me, at least – who the monsters are (if, indeed, anyone is). Is Shannon Jones’ research really monstrous, especially if it potentially leads to the end of many diseases and genetic disorders? Is it perhaps society’s fear of change – of the near-mythological singularity on the horizon – that creates the monster from the genius? Such a sought-after singularity might only be possible, it posits, through widespread acceptance of public-domain knowledge; by the refusal to privatize knowledge behind academic or private databases. It’s a wonderful thought, that.

Gamma’s a passion project of nearly two decades; sometimes it’s a mess of ideas with how much it tries to accomplish, but it’s a beautiful mess, nonetheless.

Gamma is available via Amazon as an affordable e-book.

* Timed a little too well, distrust of not just government but science and scientists is currently at an all-time high. Why? I don’t know, but I suspect the plethora of both bad journalism (e.g., alternating headlines about “experts” finding everyday foods like chocolate causing or preventing cancer — obfuscating the fact that it’s simply a loose correlation or the methodologies were inherently faulty) and excessive coverage of politicized — dangerous — pseudoscience like climate change denialism.

† While often credited as lead writer, Pacotti worked as part of a team of creative writers, including Robin Todd — author / animator of the intro and outro cutscenes, as well as writer for all in-game text (including the clever narrative use of G.K. Chesterton’s the Man Who Was Thursday) — and Austin Grossman — responsible for some dialogue and mission flow. All three of whom left easter eggs advertising their personal writing or accomplishments buried on a hackable PC in Deus Ex‘s VersaLife building.

As director and lead designer, respectively, Warren Spector and Harvey Smith were responsible for the game’s backstory and narrative structure.

‡ This is a fairly accurate portrayal of real issues underlying both academic and research — including federal — institutions. The direction of research is often negatively impacted by biases in favor of seniority and nepotism. (I’ve met resource managers in the U.S. Forest Service who didn’t believe in either evolution or the benefits of controlled fires; understanding both of which should logically be a requirement of the position.)

§ Nor did having an Islamic lead help getting this novel published.