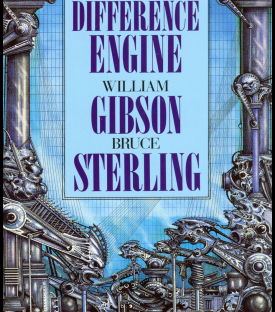 I feel obligated to like the Difference Engine a whole lot less than I did. People really dislike it, and the usual round of complaints makes a long, valid list. It’s a dense 450 pages — most of it spends time on world-building chit-chat and important ideas rather than a coherent plot.

While the reader questions if the story’s going anywhere, the world itself is fascinating, so complete in its details and sense of accuracy that it’s difficult to leave the polluted, industrial-analytical world. The Difference Engine is cut into three sections following the lives of Gerard, Mallory, and Oliphant on the trail of Gibson’s usual macguffin — a collection of programming punch cards: The explanation and importance of which is buried so deeply that many readers never understand why they’re important. All three heroes only spend a fraction of their pages worrying about punch cards and social turmoil — mostly we follow paleontologist Edward Mallory in his day-to-day business as he bumbles into characters and conspiracies that are vaguely associated with the plot.

It’s easy to get lost amid all the academic dialogue and miss the plot entirely. Much of the setting is left unexplained, and it benefits the reader to come prepared on popular 19th-century English savantry (history, programming, paleontology, geology, geography, etc.).

The greatest joys of Gibson & Sterling’s novel often came from these ‘in-the-know’ moments, where the extent of the authors’ research on so many subjects (and transference of that data into some quality sci-fi!) really boggles the mind; the lowest hiccups are when these same moments are too abstruse and unfamiliar, leaving the reader lost for 30 or more pages. The final 30-50 pages or so are the most abstruse among them for many, with important charges and plot twists regarding those sought-after punch cards hidden under bloated academic prose.

My background is in the sexy sciences of the 19th century, so I was right at home with Mallory & Co.’s dialogue on Victorian geography, geology, and paleontology. The academic climate is painted very accurately — petty bickering and all. I loved these sections. I loved the too-long discussions of uniformitarianism v. catastrophism; dinosaurian physiology; medical advancement re: cholera mapping; phrenology and eugenics leading a supposedly ‘rational’ scientific world; etc.

The Difference Engine‘s all atmosphere — a novel of intense, interesting ideas above all else — and the sense of quest structure is hit hard. Know that before stepping in; if a lovingly-crafted world of 19th-century intellectualism with a coating of sci-fi and Gibson’s political intrigue sound like your thing, this is definitely worth checking out.