Game Write is a recurring series dedicated to the fiction of game industry veterans. From the best-selling titles of Drew Karpyshyn and Austin Grossman, to the obscure classics of Jane Jensen and Sheldon Pacotti, this series hopes to unearth both the gems and the trash we tend to leave buried in the credits. In this entry, we review N.K. Jemisin & Mac Walters’ Mass Effect: Initiation, a tie-in novel to the newest — and possibly last — Mass Effect game set in the Andromeda galaxy. A welcome, exciting addition to the series, it provides some valuable background information on the mysterious Andromeda Initiative, as well Cora Harper, one of Andromeda‘s more underdeveloped heroes. 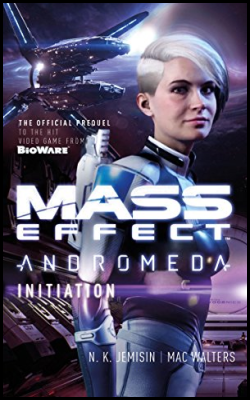 Mass Effect, we can cautiously say, is inching towards extinction. Last year, we were hit with a fourth game for the universe, set to take it in a new galaxy and a new direction after the award-winning original trilogy. It didn’t do so well. It wasn’t bad — but again, its reception was tepid, all but a death sentence from publisher Electronic Arts’ perspective.* Since Andromeda‘s misstep, we’ve only gotten the promise of additional tie-in novels and comics. The novels already have a rocky reputation thanks to the subpar work of Karpyshyn and a particularly abysmal Dietz novel, so any Andromeda tie-in’s getting a muted release. To make matters worse, Initiation promises to follow one of the unpopular game’s least-popular characters.

And yet, here we are, with N.K. Jemisin, winner of prestigious awards and innumerable accolades, as the lead author of a new Mass Effect novel. She — and coauthor Mac Walters, creative director for the game — have spoken nary a word on Initiation‘s release this last November, and they’ve said nothing since. No advertisements, no short shout-outs on Twitter — nothing.†

For a fluffy video game tie-in, there’s a lot to unpack here. I spent most of these pages just gleefully soaking in the wit and warmth of its characters, the fully-realized cultures and species histories — all the fragments that make the Mass Effect world so enjoyable — on top of nuanced social justice issues.

Initiation succeeds wonderfully, even if it shouldn’t. It is limited, in some ways, by its tie-in status — aliens aren’t described or explained, biotics sound like ridiculous magic without context — but it’s still a blast of a genre novel any way you cut it. Space opera, noir, horror — this story also mixes a broad range of genres with ease while bringing a lot of warmth and dimension to Andromeda‘s characters — specifically, in this case, Cora Harper and Alec Ryder.

In the game Initiation is based on, Cora Harper is a soldier of ‘the Initiative,’ an idealistic corporate project drawn from the notebooks of Elon Musk that seeks to ensure a utopian future for humanity in a galaxy far, far away. Initiation is her story of joining this utopian vision, of leaving her life as a warrior to stand for a personal cause.

In being tested as a second-in-command to Alec Ryder, Pathfinder for the human portion of the Initiative, Cora is asked to retrieve a stolen VI kernel. She’s assisted by SAM-E, an implanted product of that same kernel, and a prototype for the AI-human symbiont SAM we meet in Andromeda. Like SAM, he’s snappy-but-monotone, succinct in his observations, but also, like, really observant. As Cora and SAM-E chase down this kernel, this is where Initiation seamlessly toggles genre, moving from military sci-fi, to western a la Firefly, to espionage, noir, space opera, horror, and a scathing abundance of political commentary.

Seedy backwaters where assassination is legal, hidden research facilities with gone-wrong cybernetic experiments, to the dead of space with no company but the voice in one’s head: Initiation is a quick and fierce novel.

I don’t really care who’s more responsible for this book — Jemisin or Walters — but I can’t wait to read more from them both.

† This makes me curious if Jemisin really was lead author, or just a name to promote the novel. In 2016, Jemisin was announced as the sole author, but Mac Walters quietly joined as co-author sometime between then and release.