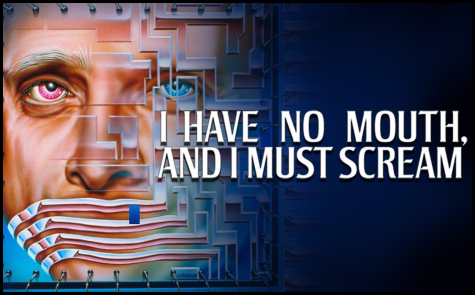 It’s not possible to read Harlan Ellison’s stories without thinking about Harlan Ellison the personality — he’s made a reputation marketing that personality as an unstoppable mixture of pretension and insincerity. 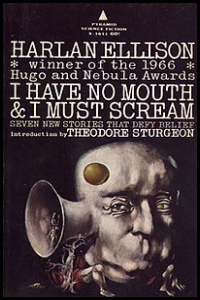 I Have No Mouth and I Must Scream is primarily remembered for its title story, a cyberthriller so apocalyptic and sadistic in tone, it has few stylistic peers. He wrote it, reportedly, in a frenzied single night, and the final published version featured few edits. This is often mentioned as a condescending brag, but the story’s — and most of the stories in this collection, which Ellison frequently notes as featuring few edits from his original vision — prose comes off as clunky and rough around the edges to my mind. Clumsy patterns repeat repeat repeat themselves between stories, showing off nice ideas but making each voice bleed together. I often appreciated the intent, but not the execution or the pompousness with which the introductions make plain.

So “I Have No Mouth and I Must Scream,” alone in the collection, might be worth reading before the roll of time deems it too dated. After the death of humanity, five survivors are trapped inside an AI (a la HAL-9000), and, tortured year after year by the hateful, artificial god named AM (as in cogito ergo sum). The survivors all represent gross aspects of humanity — stereotypes, whether naturally or shaped by AM is up for debate — like the prostitute, the idealist, the messiah, etc. (I’ve also seen them and the AI painted as the deadly sins, but what difference would that make?)

Humanity’s woes 109 years after the end of civilization are painted as grossly as their embodied human attributes. You don’t care for any of them — and you shouldn’t. The male survivors, including the narrator, are particularly fixated on the woman, who herself is a bag of sexist tropes. Humanity is gross, and the nastiness of these people and this AI are forgivable, I think, within the context of the story.

That doesn’t make the story great, though. A dangerous AI with this much loathing as written by an author ignorant of computers in 1967 all date this story. There’s no consistent logic to AM’s torture methods, or to the artificial world these stereotypes find themselves in. It truly reads like a story written in a frenzy, even if the idea’s good.

“Big Sam was My Friend” is perhaps the most dated story in the collection, envisioning alien civilizations through 1950s Americana. It’s about a teleporting performer — Big Sam — looking for his long-lost love while escaping to a space circus.

Being set in a space circus, being driven by a boring, boy’s love story full of machismo, and being centered around gobbledygook painted as sci-fi make this forgettable as hell.

“Eyes of Dust” reminded me of Chuck Palahniuk. Ellison lauds his own social satire of our cultural obsession with manufactured beauty, and then beats that message into every word and every page of this story. It’s a shallow look at 1950s consumerism via two ‘normal’ (i.e., plain-looking) lovers. I had to look the story up a day after finishing it because I couldn’t remember it.

“World of the Myth” is fairly enjoyable for its ideas, but it lacks development in its characters, and the story is stream-of-consciousness. The relationships between two men and a female scientist dips into casual misogyny and rape, two things painted as both horrible and deserved. On the other side of the spectrum, the ant-like species our heroes study is fascinating, even if descriptions of its hivemind are ripped straight from Theodore Sturgeon’s More Than Human.

Up until this story, I was still trying to enjoy Ellison’s writing. There were good ideas under there, and the bad was almost excusable by year of writing. “Lonelyache” is disgusting, and it doesn’t help that Ellison introduces it as perhaps the best thing he’s ever written. He describes it as autobiographical, inspired by his second divorce. While this could lead to some soul-searching for our hero, it doesn’t. He stews in hatred and loathing of everyone. He — and the story itself — blame his ex-wife for divorcing him, for being thoughtless and not thinking of how divorce would hurt him emotionally. Now he floats, woman to woman, abusing and discarding them like meat.

He lays blame on his ex-wife — his ex-wife who divorced him for cheating. The narrator argues that cheating is nothing, no big deal, and his wife is a bitch who over-reacted and hurt his feelings, and now it’s her fault he’s preying on other women.

This story is nowhere near the best thing Ellison’s ever written. It’s a throwaway fit of dated misogyny, lazily-written with its moral messages being obnoxious bullshit from a hateful, stupid person who’s too stuck up their own ass to bother trying to understand people.

“Delusion for a Dragon Slayer” is the dying fantasies of a man crushed in a freak accident. His vision of heaven is built on whatever he dreams, as long as he can maintain the dream. He turns himself into a fantasy hero chasing beautiful women. The prose and the story is fragmented and cut to ribbons, perhaps meant to imitate his dying mind. This story is hard to follow, and not interesting. This is an idea that wasn’t fleshed out beyond its concept.

The final story in this collection is fairly entertaining. A broke gambler and ne’er-do-well connects with a haunted slot machine. He and only he sees the spirit of a young woman in the slot machine, a young woman who dropped dead weeks earlier in front of that very machine. She professes her love for him, and he continues to rack up winnings from the machine until the clever-but-necessary twist ending.

I wish I connected with these stories more; I wish I could look past the shallow pretentiousness of Ellison’s ideas, or his execrable view of women in every story. The very hate he paints his characters with too often leads plots forward, and I could never connect with that. We should never have to rationalize against sexist portrayals, but the easy argument is it’s lazy, that it’s a sign of bad writing. I want to read about real people, connect with real characters, not be bored by abusive fantasies written by and for little boys of generations past. That this was the standout response to Harlan Ellison’s stories is telling: Ellison’s prime was all about ideas, but his writing, to me, feels rushed and drowned by poor characterization, by selfishness and bitter emotions.

I recommend the title story — at this point, at least; it’s wearing its age more and more — but the rest of this collection has dated itself far too much, and is far too forgettable.