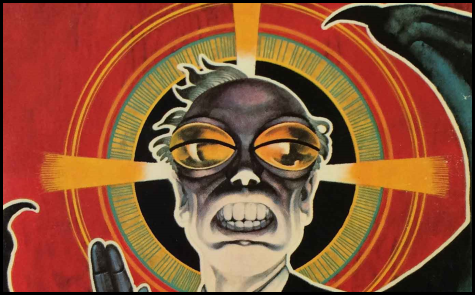 Philip K. Dick’s best-known stories are teaming with creativity, implementing psychedelia and paranoia into the narratives years before Robert Anton Wilson dared. Of his stories I’ve read, including the Three Stigmata of Palmer Eldritch, the stories’ ideas and outlines have left a lasting impression, but the writing itself often feels turgid and dry, his characterization marred by dated misogyny and fantasies for young boys.

Palmer Eldritch fits alongside his classics. The Earth’s been decimated by extreme climate change,* and humanity is being stretched thin to satellite colonies throughout the solar system. To escape general misery, people share an hallucinogenic drug called Can-D, which transports their consciousness into a shared cyberspace-like reality.

It’s a fascinating concept — an early prelude to cyberpunk† — and it only gets better: Palmer Eldritch, corporate titan, returns to Earth after vanishing 10 years earlier in an alien star system. He’s brought a new drug, Chew-Z, that promises not only the effects of Can-D, but actual immortality inside a person’s dreams. By imbibing in Chew-Z, the consumer enters a reality of their own creation in which they can stay as long as they wish; regardless of time spent in this new universe, only a split second passes in the real world.

The manufacturers of Can-D aren’t too keen on this new drug, however, and not just for potentially ruining their profits: Something is off with the returned Palmer Eldritch and his drug. Eldritch remains mysterious, in hiding, and with his drug comes an uneasy feeling of being watched or invaded. Eldritch seems to be showing up everywhere, in every reality; it’s near impossible to tell if we’re layers deep in a Chew-Z fantasy, time standing still, or marooned in a dying Martian hovel. Sooner or later, Eldritch seems to slip up, and his presence makes itself known through the three stigmata of the title: Your grandmother, your lover, your friend, your driver — anyone might suddenly bleed into a metallic and alien persona, someone you don’t know or want there.

The creeping paranoia and Lovecraftian horror of the title remain brilliant, but PKD’s writing is, I think, as bone-dry and bland as ever; his characters cardboard caricatures; his women ogled as brain-dead objects by the omniscient narration; his philosophizing defined by drugged-out, hippie naivete. Here are, for example, some of the most popular highlights by other Kindle readers:

Loc. 278:
She was a redhead and he liked redheads; they were either outrageously ugly or almost supernaturally attractive.

Loc. 1040:
“Who ever heard of a suitcase being dominated by minds from an alien star-system?”

Loc. 2242:
Can’t the past be altered? he asked himself. Evidently not. Cause and effect work in only one direction, and change is real .

Loc. 2781:
Something which stands with empty, open hands is not God. It’s a creature fashioned by something higher than itself, as we were; God wasn’t fashioned and He isn’t puzzled.”

Even though I’m again blown away by the outline of a PKD novel, I struggled — as I always seem to — through his lifeless prose and the overt misogyny typical of mid-century sci-fi. (This is a boys’ tale through and through.) Many of PKD’s most famous stories — the Man in the High Castle, Blade Runner, a Scanner Darkly — have worked better on film or TV. It’s an unpopular opinion, but I feel as long as the themes and feeling remain, butchering the original story seems to improve his work.

*This was written before global warming or climate change entered mainstream public perception. in the late ’60s / early ’70s.

† Reminder: This is 1965, predating even Dro Androids Dream of Electric Sheep?, typically seen as the first cyberpunk novel! I’m in the camp, however, that’d argue for Alfred Bester’s two masterworks, the Demolished Man (1953) and the Stars My Destination (1957) being the ‘first’ cyberpunk books — and absolutely worth reading.